This morning's Boston Globe contains a fascinating story about the intersection of collecting, eBay, genealogy, and perhaps the most revered figure in American history, Abraham Lincoln.

Paul Mellen, who collects antique pocket watches, recently acquired an unusual oversized Appleton Tracy pocket watch on eBay. Engraved on the case was the name of one Major Jonathan Ladd. What Mr. Mellen subsequently discovered, after researching Major Ladd and consulting Merle Ladd, genealogist for the extended Ladd family in America, is that both Ladd and his watch were likely present at Lincoln's deathbed.

Abraham Lincoln died at 7:22 a.m. on the morning of April 15, 1865, after a fatal wound from assassin John Wilkes Booth at Ford's Theater the previous evening. Secretary of War Edwin Stanton is said to have broken the stunned silence as he uttered, "Now he belongs to the ages." Did Ladd's watch record the time for posterity?

As a genealogist, you'll find yourself nodding in recognition as the story walks you through the discovery process — from acquisition of the watch, to initial glimmerings, to followup research, to Mellen's realization of what he had acquired. 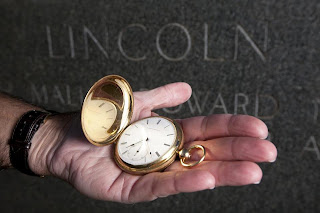 Photograph by Yoon S. Byun courtesy of The Boston Globe.

Posted by Christopher Brooks at 3:22 PM

Christopher Brooks
Bethlehem, New Hampshire
Several decades ago, Christopher Brooks, a 40-something professional writer and former academic, set out to work up a family history — expecting to write a few letters, telephone a few relatives dimly remembered from childhood, and invest a few weeks' time, some stamps, and a bit of patience. One thing led to another. The eventual result, a collaborative research project known as Tributaries, today links hundreds of researchers around the world who share research, probe the scientific frontier of DNA testing, and form the spokes of a state-of-the-art internet nexus to document the early Brooks families of New England down to present-day descendants.